Fusing together elements of hard rock, blues and even bits of classical, Heaven & Earth create a potent blend of high-powered anthems, melodic rockers and introspective ballads that evoke the spirit of a magical era. Tapping into the methodology and madness of old-school rock with a new-school attitude, Heaven & Earth are shaking their classic rock roots down to the very core on their newest effort, Dig (Quarto Valley Records). UberProAudio had a chance to check in with the bands guitarist and founder Stuart Smith. We discuss the new album and all of Stuart’s guitar gear! 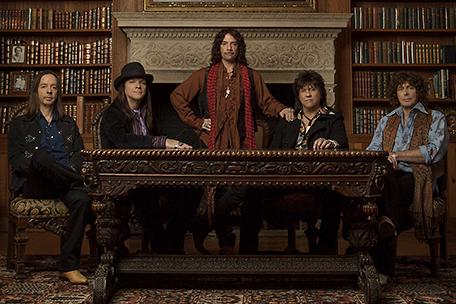 UberProAudio: Tell us about the new Heaven and Earth album “Dig” (April 2013).  How would you describe this record to a potential new listener?

Stuart Smith: This is certainly the best album I’ve done in my life.  When we started writing and recording “Dig” Bruce Quarto, the head of Quarto Valley Records said “I’m not looking for Good songs, or even Great songs… what I’m looking for is an album completely full of Phenomenal songs, so I don’t care how much it costs or how long it takes, but if you come out of the studio and think you could have done it better, go back in and do it again”.  Now that’s a dangerous thing to say to musicians like us as we’re all perfectionists and are never satisfied so the album took 14 months to record.  We spent a lot of time really crafting the songs and getting the best sound we possibly could so we’re all very happy with the results.

Like the past Heaven & Earth albums there’s a lot of diversity.  We have hard rock songs, blues songs, commercial AOR type songs, a Latin flavored rock song, a classical piece and a gospel rock song.  The way the songs are sequenced gives the whole album a good momentum.  It’s brilliant!!! Buy it. LOL.

Stuart Smith: In my opinion “Dig” does not have a weak song on it.  On the first Heaven & Earth record there were about 5 or 6 good songs that were well crafted.  On “Windows to the World” I felt there were some interesting songs but the production wasn’t up to scratch as it was a low budget album and it was also the first album we recorded at our own studio so we didn’t really know what we were doing.  Also we didn’t have Dave Jenkins running the console.  We’ve learned a lot since those albums and now we have Quarto Valley Records behind us 100%

We also used the CLASP recording system on this album so we got that authentic 70’s tape sound which is so much warmer.  “Dig” is superior to the past albums both sonically, song writing wise and playing wise as this is more of a band effort.

UberProAudio: You had some incredibly talented guests perform on the new album (Howard Leese, Richie Sambora, David Paich...). Any favorite/memorable moments working with these musicians in the studio?

Stuart Smith: We had a great time working with all of them.  We hadn’t really planned to have any guests on this album except Howard.  It’s sort of a longstanding tradition with us that whenever we do an acoustic song Howard and I play it together.  He generally plays the 12 string guitar and I play the 6 so we had him come in and join me on a couple of songs.  He’s also a great string player/arranger so we had him play strings on a track as well.

David Paich has been a great friend for many years and I always go to his Christmas Eve parties. David and I play Christmas carols together at them and we never have anyone to sing them so in 2011 I took Joe Retta with me.  After the party Joe and I went into David’s studio with him and we played  the rough track to “I Don’t Know What Love Is” and he absolutely loved it.  He thought it was a definite hit and said he’d like to play some strings on it… so we brought it over a couple of weeks later and he worked his magic.

Richie Sambora was a total trooper.  When he was recording his latest album, “Aftermath of a Lowdown” in East West Studios, I went down to have a listen and borrow a Gibson SG off him as I didn’t have one at the time and we needed that particular guitar sound for a certain song.  While I was down there we both signed a guitar to be auctioned off at a charity event and his producer Luke Ebins, took a photo of us both with the guitar.  The picture soon got out on the Internet and I had hundreds of requests from fans who asked if we were going to do something together again, (Richie had sung and played guitar with me on a couple of tracks off the first Heaven & Earth album).  I asked him what he thought about the idea and he said, Yes, let’s do it.  We set a day to come down to East West but on the day there were some huge technical problems there so we couldn’t do it.  Then Richie got busy, his album was released and he was flying all over the country promoting it. He then began playing with Bon Jovi and also started touring to support his solo album.  On his first and only day off in 3 months he came into a local studio with us and spent 6 hours adding all sorts of guitars and even his signature talk box to a track called “Man & Machine”… so I love him to death for that. 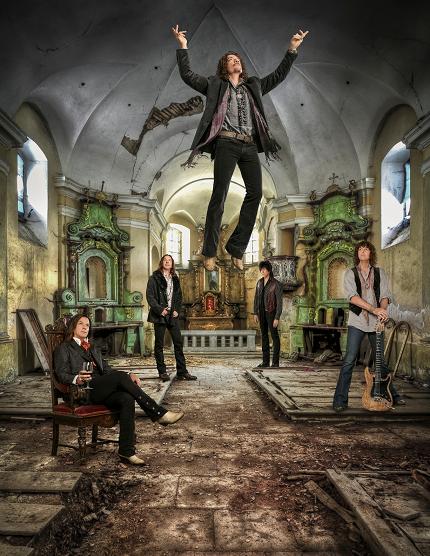 UberProAudio: Tell us about your guitar gear (Guitars /Amps /Effects /Strings /Picks). What guitar gear do you take out on the road with you?

Stuart Smith: For my electric guitars I primarily use 70’s Fender Stratocasters.  I still have the first Strat I ever bought which sounds incredible but I’ve had to retire it as I wore the neck out.  I do need to get a new neck from Fender and start using it again.  I have quite a bit of work done to these Strats.  Firstly I take out the middle pickup and replace the regular pickups with special ones designed for me by Seymour Duncan.   I also replace the saddles with Graphtech saddles and the tuners with Sperzel locking tuners. I have the necks slightly scalloped and use Dean Markley Blue Steel Strings.  For picks I use tortoise shell picks from Pickboy via Greg Atkins at Strum n’ Comfort, Earvana nuts and Monster Cable cords.

For my acoustic guitars I use Taylor, Babicz and Breedlove.

For effects I use a Peterson tuner, either a Chandler Digital Echo or an MXR Carbon Copy, an MXR Phase 90, a Boss OC-3 Super Octave Pedal, a Morley Bad Horsie Wah-Wah pedal and a Morley Optical Volume Pedal.  I’ve also just started using an MXR Micro Flanger which Joe Bonamassa recently gave me.

We’re in rehearsals right now so I’m trying to decide which amps to use on the road but it’ll probably be a mixture of Marshall, Kasha and Albion.  I have an old Marshall Major which I overdrive using a Seymour Duncan SFX-03 Twin Tube Classic and I split the signal to the different amps using a Morley George Lynch Tripler.

UberProAudio: Does your live guitar rig mirror your studio rig or did you use some different goodies in the studio for the Dig record?

Stuart Smith: Pretty much… although I did use a Les Paul and Telecaster on this album to get some different sounds and a Vox AC-30HW2X.

Stuart Smith: That’s a difficult question to answer but if pushed I’d have to say my number one Strat, my Taylor Leo Kottke 12 String, a Breedlove acoustic that the head of my record company gave me for my birthday and for recording I use my 200 watt Marshall Major.

UberProAudio: With the big album dropping this spring (April) is a tour in the works?

Stuart Smith: Yes and after 14 months recording in the studio I’m more that looking forward to it. We’ve started rehearsing for an industry showcase in Los Angeles at The Henry Fonda Theater on April 10th so we’ll see what happens after that.

Check out Heaven and Earth at http://www.facebook.com/officialheavenandearth