Armed with a single guitar and basic drum kit, Detroit based band IAMDYNAMITE have quickly established themselves as a rock and roll force to be reckoned with. UberProAudio had the chance to chat with IAMDYNAMITE's frontman/guitarist Christopher Martin about the bands new album SUPERMEGAFANTASTIC, guitar gear and more. 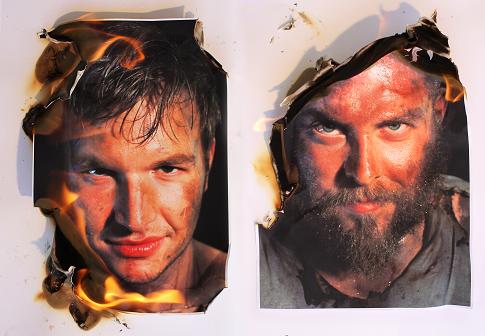 UberProAudio: Tell us about the new IAMDYNAMITE album “SUPERMEGAFANTASTIC” (June 2012).  How would you describe this record to a potential new listener?

Chris: It sounds like a cool, high energy, rock record.  Like how we sound live, in the best way.

UberProAudio: How would you compare the new album to the band’s earlier EP?

Chris: We were not fond of our earlier E.P.  It had a very "Modern Rock" sound in the strictest sense, which made us kind of sick to our stomachs.  But some people do dig that sound, and that's totally cool that they do.

UberProAudio: What was it like recording the new album at Willie Nelson's famous Pedernales Recording Studio?

Chris: It was pretty awesome.  I wrote lyrics in like, the Willie Nelson lounge area, where the wall was covered with the front cover of every album Willie Nelson ever did.  Which was a trip.  I'm pretty sure I have them all memorized now.

UberProAudio: Why a two piece? Have you ever been tempted to add more members?

Chris: We've been playing in bands together since High School, and we were always playing in bands with 4-5 guys in them.  People would come and go, but it was always me and Chris.  So we decided to just keep it that way.

Chris: I have a pretty simple rig.  I have only two guitars as of now that I even bring on the road.  My main guitar is just an Ibanez Artcore that a friend of mine gave me, but I took out all of the original electronics and put in two Gibson classic '57 pickups.  The other guitar is a Gretch Electromatic semi-hollow body, which for a moderately priced guitar does remarkably well for me.  I use two amps: an early 70's Fender Bassman Silverface head through a Mesa 2x12; and then usually a Fender Twin or Fender Bassman combo. Pedals are just a Big Muff and a Boss tuner.

Chris: Yes, and dear lord I cannot remember everything we used in the studio.  We used a lot of Fender amps... I remember using a Fender TV Bassman combo a lot, cuz it sounded really good.  Some Fender Twins, Deluxes... maybe a Super Reverb... Also some other bass amps for some cool fatty sounds.  But they weren't typical ones and I can't remember what they were.

Chris: Definitely my old crappy Ibanez guitar, because it's getting so beat up and I've had it for so long.  I think brand new, it was like $300, but it sounds unique to me and I love every weird dent in it. New gear, definitely going to add some interesting stuff in the future, I'd really like a [EHX] Memory Boy Deluxe. It's a delay, that SOUNDS fairly analogue, but you can tap the tempo you want, which is a feature I really like.

UberProAudio: Being a two piece you have a lot of sonic space to fill up. Would you say your thick guitar sounds are a product of technique, gear, or a combination of both?

Chris: Everything.  You just start adapting your playing style to fit being a two piece band.  And then sometimes you try stuff you think wouldn't work and it might.  It's more a question of dynamics, with a two piece, I think.  But I encourage everyone to try it, it really makes you a smarter more impactful player, I think

UberProaudio: Tell us about the ‘Stereo” video that has been getting a lot of praise. Who created the concept for the video? What was it like doing the shoot?

Chris: I'm assuming you're referring to the one we just filmed this spring… It was our first time shooting on a green screen.  So that's strange.  Unless you like green.  In which case, I guess you'd feel really great about it.  It was directed by Merritt Fields, and yes the rumors are true, he IS a fantastic dancer.

UberProAudio: A HOT new album and touring…anything else readers should know about?

Chris: Chris and I were born without the ability to grow hair.  We are totally hairless creatures. All the hair that you see is horse hair that we purchased at great expense from Eastern Europe.

Thanks for having us!