JW-Jones has one of the most energetic and exciting live blues shows on the scene. JW has shared the stage with a variety of big names, played shows all over the world, been in Guitar World, and received praise from Dan Aykroyd. It is easy to see why JW is considered Canada’s top touring blues act. JW was kind enough to let UberProAudio pick his brain on blues guitar tone, gear and more! 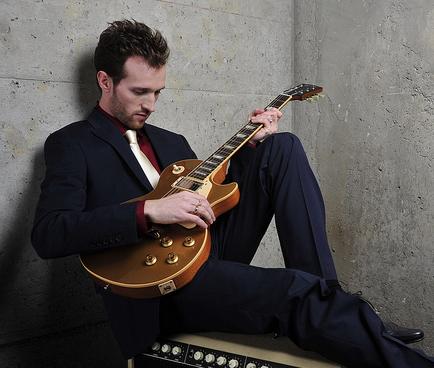 UberProAudio: On your album, Midnight Memphis Sound, you did most of your tracking with your ’07 gold-top Gibson Les Paul.  Are there any other gear constants you used to shape your tone for the record?

JW: I also used an Epiphone Dot on the song ‘Mean Streak’, and my first electric, a 96 Strat on ‘Make a Move’.  Otherwise, it was my first time recording with my favorite amp to date, Fender Vibroking (3x10’s) [blonde].

UberProAudio: How, if at all, does your live rig differ from your studio set-up?

JW: In the past, I have used guitars on recordings that I wouldn’t usually use live, such as my ’59 Kay Switchmaster which doesn’t stay in tune very well, and my Gibson ES-295, which is just a bit too fragile to tour with.  Otherwise, I keep pretty consistent with gear live or in studio.

UberProAudio: Do you find yourself taking advantage of the liberties the studio affords guitarists, or do you tend to keep things simple?

JW: There was a track on my last CD “Bluelisted” that was supposed to be a warm-up song with a guitar solo I would later replace, recorded in a dead sounding isolation booth.  I enjoyed the relaxed and natural feel of the playing on that whole track, but the tone wasn’t cool enough for me to leave it on the record.  The engineer, Jason Jaknunas, added a bit of “room” and a touch of reverb to it, and it came to life.  I couldn’t believe it, and though I had previously been against using the “liberties” as you called it, I had to let it go for the sake of the good relaxed/cool performance.

UberProAudio: Being one of Canada’s top live blues acts, you maintain a pretty rigorous touring schedule.  What measures are you taking to preserve your gear from the hardships of the road?

JW: Most of the venues we play have backline.  We don’t do as many van tours now as we used to, so we don’t carry amps as often.  So as long as the guitars and bass are staying in shape, we’re good to go!

UberProAudio: Any gear malfunction anecdotes from the road that stick out for you?

JW: Krazy glue!  I haven’t had to use it in years, but there have been many tours that I had to use krazy glue on my finger tips to keep cuts closed.  Otherwise, I always carry extra tubes, soldering gun, and various tools to keep things tight.

UberProAudio: What does a typical JW Jones signal path have in it?

JW: I remember reading a Jimmie Vaughan feature way back, and he said “a patch cord”.  The only effect I use is reverb; at home, the 3 knob reverb on my vibroking is absolutely amazing (exactly like a ’63 Fender Reverb tank), and on the road, I carry the Boss pedal that emulates the 63 Reverb sound.  It’s the closest thing on the market, I think, that is that portable, and makes it much easier to get the tone you want from backline amps.  Oh, and a boss tuner/pedal that gear heads ask “what effect is that on sitting your amp?”.

UberProAudio: What was the first guitar you ever owned?

JW: I received an acoustic guitar (I think it was an “Anjo”) as a gift on my fourth birthday, but didn’t really touch it for many years.  I started taking it seriously when I was 15, bending the acoustic strings, influenced by Albert King (via SRV, Jimmie Vaughan etc.).  Then when I was 16, my grandfather bought me my first electric, a 96 Fender Strat which was my main axe for over a decade.

UberProAudio: What do you consider to be the most important component of your tone?  Is there one piece of gear you couldn’t live without, or wish you still had around?

JW: I have heard many times that “it’s in the hands”, and I tend to agree more and more.  Though, if I could, I would take my Gibson Les Paul and Fender VibroKing everywhere. 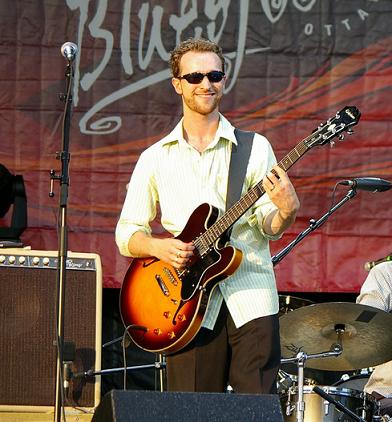 UberProAudio: Who are some of the players that have influenced your playing and your tone, respectively?

UberProAudio: In your opinion, where do most guitarists go wrong when trying to dial in a great sound?

JW: I know you guys specialize in gear, but I have to say that guitarists need to concentrate on their hands.  The hands are so versatile with how you pick (pressure, how the pick is held), where you’re picking (closer to neck or bridge), how you mute (palm or fingers), how you bend (pick or fingers), etc.  Also, best not to have TOO MANY effects.  So many players rely on technology to give them cool tone.  I think the more pedals you have in your signal path, the more things can go haywire.

UberProAudio: What’s the best piece of advice you can give to young guitarists trying to find their own sound on the electric guitar?

JW: It just takes time.  I have had friends and fans tell me they could tell my tone/playing when they hear it on the radio or from down the street, which is great to hear, but I don’t feel like I am “there” yet.  But my point is that I feel like I am getting closer, and it’s only taken 15 years.  I guess my advice is to be patient, but also try as many tones as you can and be honest with yourself in terms of what moves you.  If you like it – go with it.

UberProAudio: Playing and tone are often symbiotic, with one frequently shaping the other.  Do you consider your playing a product of your tone, or your tone a result of your playing?

JW: That’s an incredible question!  I think my tone influences my playing quite a bit.  I always play better when I feel like my tone is really kickin ass.  Every stage sounds a bit different, and some make you feel like the notes are singing just how you like, and other times it feels like a bit of a struggle.  I used to think turning up the volume was the answer, but have actually found (thanks to Little Charlie), that often, turning the volume DOWN is the thing to do!

UberProAudio: Amongst consistent accolades for your tone, you’ve received some special recognition from the folks at Gibson.  Can you talk a bit about your relationship with the company and/or your affinity for Gibson guitars?

JW: I use a Gibson Les Paul Gold Top.  It’s the smoothest guitar I’ve ever played, and super versatile.  It’s a 2007 standard, which was the last year they made the chambered (lighter) body, with a 60’s profile neck, so it’s not the typical “baseball bat” that Les Pauls are known for.  Gibson interviewed me several months back about getting classic Les Paul tone from backline amps while traveling and it wasn’t long after that the endorsement deal came to fruition.  It’s really exciting to be part of such a classic and prestigious company.

UberProAudio: What’s the future look like for you JW?  Anything major on the horizon you’d like our readers to know about?

JW: We’re recording in the fall/winter and have a lot of new songs that are going to push the boundaries a little harder than we have in the past.  I let these songs become whatever felt right, without putting the rules of making them sound like they were directly influenced by traditional blues.  Some of them have a country twang, and some of them have a soulful Detroit vibe, while there is still plenty of room for my true love, straight-up, real blues.  We’re really excited to tour Europe this summer and fall, playing several of the new songs to get them tight and swinging before recording them.

Great chatting with you, thanks for the opportunity!