UberProAudio had the chance to speak with Matt Reisinger, guitar player in Tampa, FL band Select Start. "The New Atlantic" is the six-piece pop rock band’s second EP, which has quickly made fans of us here at UPA. The bands catchy tunes and great use of vocal harmonies (including a six part acapella finale on the new cd) will make a fan of you too. We discuss the bands guitar gear, the new album and more. 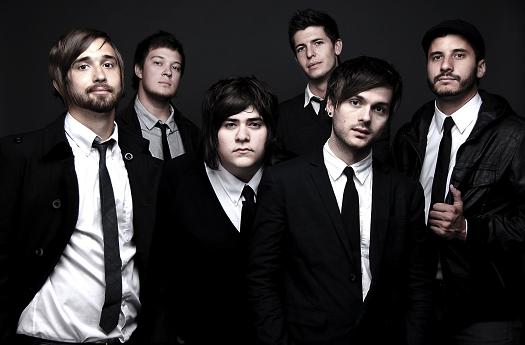 UberProAudio: Tell us about the new Select Start EP, " The New Atlantic".  How does it compare to your last record, "The Rotary"?

Matt: Most of the albums that we have recorded over the years contain songs that we had written in a matter of hours, and The Rotary is no exception. Conversely, when we began working on The New Atlantic, we spent over half a year writing, recording, re-writing, and improving over twenty songs that we eventually whittled down to seven gems that we felt most proud of.

Matt: We have three guitar rigs on this current tour, two of which are Fender Telecaster guitars played through V32 Palomino 2x12" amps [Crate]. Jason, our lead guitarist, has a bit more in his arsenal: Fender Telecaster through a Vox AC-50 amp with an array of pedals, such as the Electro-Harmonix Holy Grail and a Boss Giga Delay. We also have a Fender mandolin that is peppered throughout our record and our live set.

UberProAudio: Did your studio rig for the new EP differ at all from your live rig? If so, what different gear was used in the studio?

Matt: We recorded The New Atlantic at Earthsound in Vadosta, GA with engineer/producer extraordinaire, Lee Dyess, and he has amassed quite an impressive collection of guitars, amps, cabs, pedals, racks, etc. Therefore we had the opportunity to use several configurations to dial in the exact tones we needed.

Matt: We love the Vox AC-50 because it's hand-wired and the tone that it produces is much bigger than any head/cab combination that we've used. As for new gear, we are huge fans of Moog Music, so we'll be adding a few Moogerfooger pedals as soon as possible; namely the Analog Delay and the Phaser.

UberProAudio: With the new EP out, what is on the horizon for the band that we all should know about?

Matt: We will be touring relentlessly to make sure the world hears what we have to offer. We are prepared to spend every waking moment to make Select Start the next Jefferson Starship.

Find out what the band is up to at http://www.facebook.com/selectstartmusic