We’ve been closely following Atlanta, Georgia based metal band Tetrarch for the past couple years. Combining the thrash roots of Metallica with the melodies of Iron Maiden, Tetrarch is determined to bring back the sounds of the old with a new school twist, and it’s hard not to like what they are doing. Formed in 2006 by Josh Fore, Diamond Rowe, and Tyler Wesley, Tetrarch has majorly increased their game by progressively playing larger shows and recording with top producers. If you ever get a chance to see them, you will be treated to a high energy show and some great metal songs. All of the bands hard work has culminated in their new EP release “The Will To Fight”. We chatted with Diamond Rowe about the bands new EP, her guitar rig, and more! 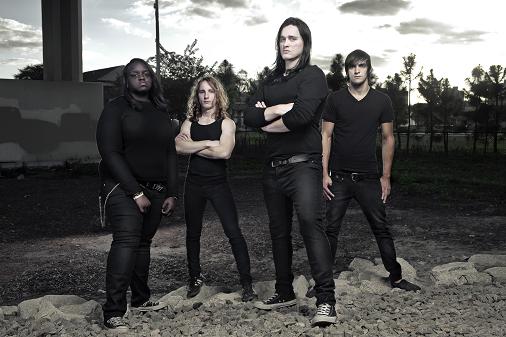 UberProAudio: Hi Diamond. Thanks for talking with us. As an up and coming band, tell our international audience a bit about Tetrarch.

Diamond: Thanks a lot for having me. Well, we are a metal band from Atlanta, Georgia, and we have been together for about 4 years now. We are all 20-22 years old. Josh(rhythm guitar/lead vocals) and I actually met in middle school, and basically started the band once we began high school and realized we had the same musical goals. We have gone through a couple of bass player and drummer line-up changes since then, and now I think we have a great lineup. We really focus on trying to mix new school metal, with a bit of old to come up with something that is our own.

UberProAudio: Tell us about this new EP you just recorded in Florida. Who did you work with on the album and how did it go?

Diamond: We actually went down to Pompano Beach, FL to record our new EP “THE WILL TO FIGHT” at Bieler Brothers Studios. We worked with producer Matt Laplant who has worked with other bands like Mutiny Within, Sikth, Skindred, and many other awesome bands so we were stoked to see what we could come up with having his help. It was the first time we have recorded anywhere besides Atlanta, so it was actually a really refreshing experience, just being able to get away from our normal every day routine to go down to Florida to do what we love and work with such an great producer. It was a super tiring couple of weeks because we were literally in the studio from 10am to 2am every night, but in the end I think it was definitely all worth it haha.

UberProAudio: How do the songs on this EP vary from the past tracks Tetrarch has recorded?

Diamond: I think the new tracks sound at least a little more mature then anything else we have done. Vocally, Josh tried out a lot of new things that he has never done before. We have some cleaner singing, screaming, his usually growling, and its awesome to hear variety as far as his voice goes. Vocal harmonies are also something as a band we had never really dabbled much in, and there’s a good amount of those on the EP, but in a good way haha. Also, I think even with the guitar riffs and drum beats, everything sounds a little more mature, and I’m definitely happy with how my solos came out on this EP. Not to mention, I think with the choruses on this EP people will find it easier to catch themselves walking around singing the songs.

UberProAudio: Watching the behind the scenes videos of Tetrarch on Youtube, it’s clear that the band is all good friends and that you have a lot of fun. Tell us a little about how you all know each other, and how that level of comfortableness is reflected in your live playing.

Diamond: Friends? Were not friends…I can’t stand those guys. Haha. No I’m just kidding. We’re all great friends. I think when there’s that level of comfort in a band, It’s easier to get things done and progress. As far as live shows are concerned, A lot of times, its obvious to me when bands are on stage whether there is good relationship between the members or not. All four of us have a lot in common, music is what we love, and I think people can see that at our shows and hear it in our music. 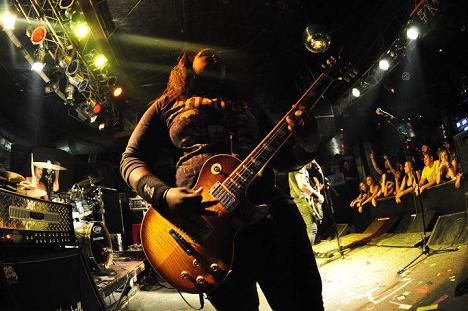 UberProAudio: Over the last year or two that we’ve been talking, Tetrarch seems to have gone a long way in developing their sound, look, and songs. What has been leading this transformation?

Diamond: A lot of times, bands start out sounding one way, and gradually progress into what they’re “sound” ends up being. We have always had a vision of what we wanted this band to be like, and I think we finally got to the point that we could move towards achieving that as far as abilities are concerned. We have always wanted to be that thrash band with obvious influence of the older thrash bands, but also having some modern metal influence as well. It’s definitely a time trying to find the right balance, but the closer we get the cooler it is haha. As far as looks are concerned, for a while we thought looking like we were dirty metal kids off the street was the most metal thing to do, but in all honesty, we all come from good homes, and kind of dig the contrast of that, and us playing heavy, thrash music. Its kind of an interesting concept I think? Haha.

UberProAudio: As some of your show reviews have mentioned, you don’t necessarily fit the mold of what people expect a highly skilled metal guitar player to look like. Tell us about your background in guitar and music, and what it has been like breaking the metal mold.

Diamond: Well, I’ve always been into music, since I can remember, but I didn’t really get into metal until I was about 14 years old. One of my friends in middle school was really into Nirvana and music like that and I became a huge Nirvana fan. After that, it kind of opened a door for me to get into heavier stuff like Metallica, and Pantera. Not too long after that I realized I wanted to play guitar, and surprisingly it stuck. I literally NEVER put it down haha. Its weird to me when people say that I’m breaking a mold for metal, because it all honesty it never crosses my mind. I’m just doing what I love and hoping people like it haha. But if that comes with carrying the torch for those like me to come, Id love to, and hopefully I can do it well haha.

UberProAudio: Tell us all about your live guitar rig. What are you using for gear?

Diamond: For my live rig, I run a Mesa Triple Rectifier head through a Marshall 1960 cab. My Ibanez TS9 tube screamer is always on , just to dirty it up a bit more. I am a gain fanatic haha. I’m using a BOSS BCB-60 Pedalboard equipped with my TS9, a Boss DD-7, a Dunlop Cry Baby and of course my Boss tuner, and my main guitar is my Gibson Les Paul Standard. I’m not a huge effects/pedal geek, I am a lot about the actual tone coming out of the amp and guitars, but pedals spice it up just a little for me sometimes. 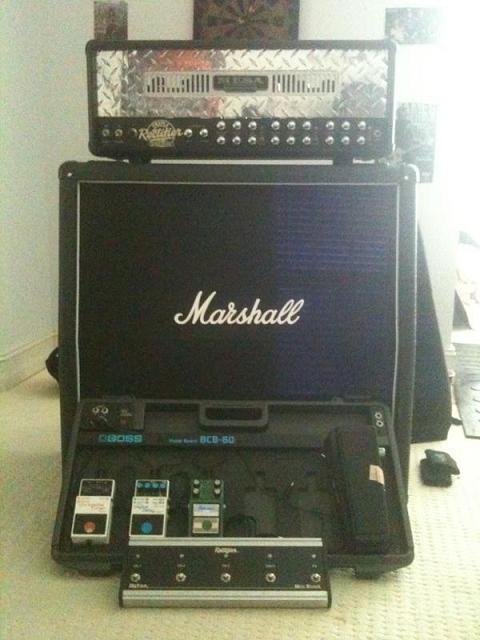 UberProAudio: What about your studio rig? Are you using any of the same gear from your live rig?

Diamond: As far as our studio set up, with the new EP we used a Peavey 6505+ and a Bogner Ubershall for all of our rhythm guitar tracks. We got a huge and awesome tone mixing those two amps and they both were going out of a Marshall Cab. I think we used a Ibanez tube screamer with the Bogner for the most part as well. I did all my rhythm guitar tracks on a Gibson Custom, and all of my leads on my Kirk Hammett signature LTD.  Nothing too complex, but the tones came out awesome, I’m very happy with them.

Diamond: Oh gosh. The guitar wish list!? I think if I tried to name everything it would take forever! Haha. But if I could name a few I would say, a Black Gibson Les Paul Custom (or several haha), A Jackson King V, and some rack gear. Besides the Les Paul Custom, everything generally changes everyday, but at the moment, that’s what I’m into getting haha.

UberProAudio: You work hard on promoting the band and are a big part of making things happen for Tetrarch. Do you have any advice for other metal bands looking to make a name for themselves?

Diamond: The best thing I can say is to make things happen for you band, and don’t wait for them to happen. I think a lot of bands wait around for the other people to make something happen but in reality, while they are waiting around, they are missing opportunity. Be sure you go to the source, and open your own doors best you can. Get your name out there, and stay in touch with those that you want to hear you out. Generally, if you’re persistent enough and work hard enough, you will get positive results.

UberProAudio: How does the band write songs? Is it a collaborative effort?

Diamond: Basically, Josh or I will come in to everyone with either a riff, or a full song and we will jam it at practice. Everyone will kind of put in their input and then the two of us will take what we built on it at practice, and work the arrangements, lyrics and part transitions until its how we want it.

UberProAudio: What does Tetrarch have planned for the future?

Diamond: After the EP is released we just want to play as many shows on it as we can, spreading the word about it and continuously gaining new fans. Everyone can keep up with our show dates at www.facebook.com/tetrarchga or www.myspace.com/tetrarchlive. Come out to a show, and hang out with us. Thanks!