Pop-punk band The SpacePimps MySpace page gives a good summary of the band, "The SpacePimps are: Five U.S. Tours, one Japanese Tour, one full-length CD, one EP, 10,000+ records sold in five continents, four magazine spreads, countless press, and three dudes who love what they do." Add to that a brand spankin new CD "Stuck Here Forever" released on June 8th 2010! If you like other pop-punk bands like Blink 182, then The SpacePimps is a band you must check out. We were lucky enough to catch the very busy Rishi Bahl for an interview. We find out about Rishi's guitar rig and more! 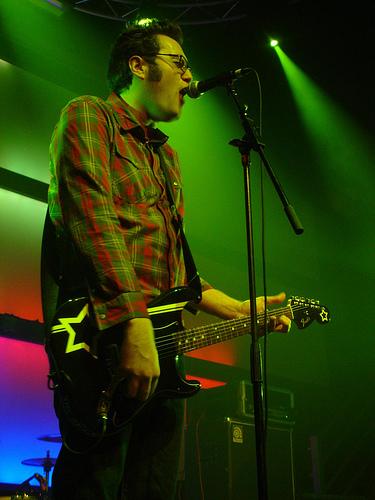 UberProAudio: Hi Rishi. Thanks for talking with us. Tell us about the new SpacePimps album, “Stuck Here Forever”. What can fans expect?

Rishi: First of all, thanks a lot for letting us talk to you. Our new record is by far our best effort yet. We all come from a punk rock background; bands like Blink, NOFX, Face to Face, New Found Glory, and The Ataris have definitely shaped our musical preference as well as our style. This record, sonically, is a throw back to the pop punk that existed when we were growing up, circa 2003 (we even have a song called 2003 on it). It’s honest, melodic, and really encapsulates the kind of punk rock we grew up on. It is nothing like the “punk” that exists these days with dance beats and guys wearing v-necks. This is the record you want to put in your stereo when you are driving through your hometown, with your best friends and the windows down, on the way to your favorite bands show.

UberProAudio: How would you compare the new album to the bands previous records?

Rishi: This is by far a large step forward for us. Our last record did not have the budget needed to really make the songs sound as good we thought they were. As ridiculous as it sounds coming from a guy in a band called The SpacePimps, the record is more mature. Haha. We definitely love potty humor and fart jokes, and this record is by no means serious, but I think we have found our stride on this record.

UberProAudio: What was it like working with producer Chris Badami (The Starting Line, The Early November)? What did Chris bring to the table for this project?

Rishi: Chris Badami is a God! Just kidding. But he is amazing at what he does. We were stoked just to be able to walk in a room with a guy who produced records we idolized growing up. He has a knack for being able to identify small problems with songs that make huge differences in the overall quality of the track. His experience in our genre made it comfortable to work with him. Lots of producers who have worked with popular bands tend have a hierarchical attitude towards indie bands. Chris did not have that at all, and made it easy for us to work and have fun while recording this record.

UberProAudio: You guys have some really catchy tracks on the new album. Tell us about the bands songwriting process.

Rishi: Well, I think it all starts with me coming up with a chorus or a melody. I try to work around that part and then grow around it with the band. Once I have an idea of where I think the song will go, we hash out the arrangement and smaller details with the band. Jared (drummer) is really good at arranging and Brian (bass player) is really great at finishing off the integral parts that create smooth transitions in both melodies and lyrics. Once the skeleton of the song is done, I got back and throw in the missing lyrics. The process is probably longer than most bands. I commend those bands that say they have 40 plus songs for a new record, but we simply not that kind of band. It takes months for us to write songs that we are all happy with. Slow and steady wins the race.

UberProAudio: Your guitar rig looks fairly straightforward. Tell us about all the gear that you use in your live rig (guitars, amps, effects, etc…).

Rishi: I would love too. I use a Mesa Boogie Triple Rectifier with a standard Mesa Rectifier Standard 4x12 cabinet on one side, and a Marshall 1960a 4x12 cabinet on the other. In my rack, I have a bbe 482i Sonic Maximizer, and a Shure SLX wireless system for my guitar. I dabble with some other rack gear like an Empirical Lab FatSo JR, but do not always use it live. I am in the process of attempting to run two heads through two cabs. I have a Mesa Stiletto that I am planning on using an A/B switch with a half second delay on one of the heads to use in the future. It will give the illusion that there are two guitars on stage (since we are only a 3-piece band) 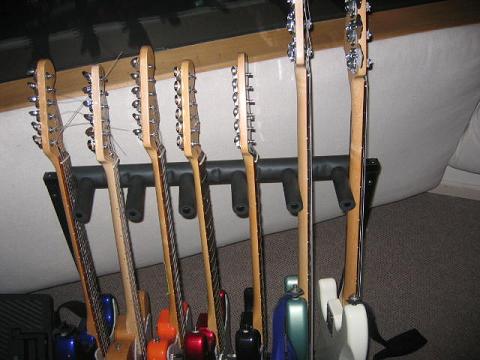 UberProAudio: What’s the next piece of guitar gear you want to get?

Rishi: I am looking to purchase an effects board that you can program multiple amps into it. What this means is that it will not only have tons of effects, but also there is a built a/b switch that will also change channels on two amps at the same time, rather than manually having to change each channel on each amp along with the a/b switch. Line 6 makes a unit that can do this. There are a few other companies that do it as well.

UberProAudio: What guitar gear did you use in the studio for the new album? Was it the same gear as your live rig, or did you utilize some different goodies?

Rishi: No way. We used a bunch of amps that we do not use in our live rigs. We used a variety of gear on this record. We recorded some of the rhythm tracks with a Marshall JCM 200 mixed with an Orange 30w twin channel head. We used a mesa dual rect for the dirty leads and a Vox AC-30 for the cleans. There were definitely some other amps we used sporadically, like a Bad Cat for some clean leads, and even a pig nose in isolated parts. We opened up our eyes on this record to sounds that we never thought would fit a band like us. 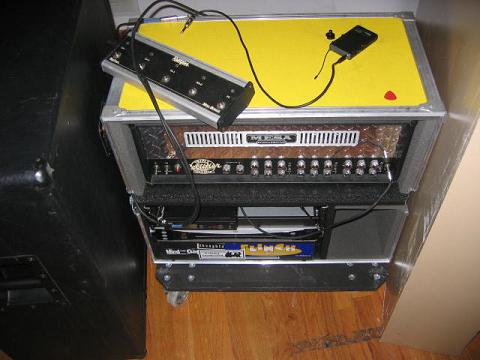 UberProAudio: A band doesn’t get called “one of the hardest working bands on the East Coast “ easily. Throughout the bands career, you guys have done a lot of the work yourself (promoting, selling, etc…). What advice can you give to independent bands trying to make a go in the music industry?

Rishi: Well, we are still learning ourselves, but I would say there is nothing you can do to hurt your bands reputation. This means that go to every show, hound every promoter, signed bands, labels, fans, potential fans, radio stations, friends etc. There is nothing bad you can do to your band (as far as promotion is concerned). If you make someone angry it is still making your band visible. I guess I would say, piss as many people off as you can, and your band will be successful.

UberProAudio: You guys have had a lot of exposure in Japan. What is it like playing over there? How would you compare the music scene to the US?

Rishi: Japan is totally different. The market is more conducive to our genre because there are not many of us out there. The US market is completely saturated with bands. There is not room for any one to really make a name for themselves because the band down the street is doing the same things. Japan was a breath of fresh air. People genuinely love music there. The cool thing is that the majority of people we met could not speak English, but they knew the words to our songs. It was unbelievably humbling.

UberProAudio: Tell us about the tour for this album. I hear more dates are to be listed. Are you guys going to visit Japan on this tour or any other far away lands?

Rishi: Being an indie band, things are always last minute. We are still working out dates, but some are confirmed. We are planning on going back to Japan in the fall. If anyone out there wants to book us, email me! We are up for playing anywhere. No show can be too small if you gain one fan. We will be doing an east coast/Midwest tour in the markets we have done well in to promote this new record. Come out!

UberProAudio: What does the future have in store for The SpacePimps?

Rishi: Our goal is not to get signed and be huge, or sell out arenas (though all of these things would be great). Our goal is for our music to reach as many people as we possible. For example, it was a huge step for this record to be in some stores. To be able to walk into a store in the US and see our record sitting beside Blink and bands we love is a dream come true. Our future consists of continuing to work as hard as we can while trying to maintain the essence of our band, which is to have fun and offend as many people as possible. Thanks!!

Find out what The SpacePimps are up to at http://www.myspace.com/thespacepimps