Progressive Rock duo, An Endless Sporadic, who gained worldwide success with their 2008 EP release Ameliorate, which had featured tracks on Tony Hawk’s American Wasteland, Guitar Hero® III: Legends of Rock, and Guitar Hero® World Tour, spoke with UberProAudio about the release of their first full-length CD of original material, entitled An Endless Sporadic. After hearing much great buzz about the band, including positive words from Jordan Rudess, we knew we had to speak with this Progressive Rock powerhouse.  Writer Kevin Williams sat down with Zach Kamis, guitarist and keyboard palyer, to discuss the new album, guitar gear, and more!

UberProAudio: Hi Zach. Thanks for talking with us. Can you tell us about some of the different amp/guitar combinations you used on the new album?  Anything special in the signal path?

UberProAudio: One of the first things I noticed was the acoustic guitar sound that you’ve got on “Waking Hours.”  It’s got a nice balance of warmth and sparkle.  What kind was it?  Did you track all your acoustic guitars with it?

Zach: I forgot what kind of acoustic guitar it was but I can tell you how it was miced. We used a Neumann TCM 103 on the neck and an AKG C-12 on the body compressed with a TubeTech CL 1B.

UberProAudio: Porcupine Tree’s Steven Wilson is one of progressive rock’s pioneers of amp modeling, having expressed his affinity for it in the studio a number of times.  Did you make use of any amp modeling on the record?

UberProAudio: What’s in your keyboard rig?

Zach: On this album I just used software synths including Moog Modular, Native Instruments B4 II, Logics Grand Piano, and some great Mellotron samples that were loaded into EXS24.

When we play live, I’m going to use a Nord Lead 2X, Nord Electro 3, and run Mellotron samples off my laptop.

UberProAudio: The piano sounds on tunes like “Shell” and “Beyond the Horizon” is extremely natural.  Did you favor an authentic piano rather than using a soft-synth or keyboard sample or is there something magic that you found for the recording session like Synthogy Ivory?

UberProAudio: How did Roine Stolt [The Flower Kings, Transatlantic] help shape the album’s sound?  Can you describe your experience working with him?

Zach: Roine Stolt has been a huge inspiration to me. The man is a prog genius. I have always admired how he can write long arrangements and use themes in many different ways to make everything cohesive. He is also one of the most tasteful guitar players I have ever heard.

As Andy and I were creating demos, I would send bits and pieces to Roine and he would give me great feedback on the form of the composition. He contributed a lot to how we would layer sounds. Roine also did a fantastic job on mixing the album.

He was a pleasure to work with. His presence alone made me way more passionate about what we were creating.

UberProAudio: Did you guys get to preview the new Transatlantic album while working with Roine?

Zach: Unfortunately, we didn’t get to hear anything.

UberProAudio: Tell us a little about how the studio was set up; what did you use for tracking, mixing, etc.?  Were there any gear-gems that it was equipped with that really psyched you guys out?

Zach: We tracked everything in Logic 7 and primarily used Focusrite pre amps. Everything was mixed in Logic as well.

UberProAudio: Did you play everything live when you recorded or did you track things in pieces?

Zach: It was a mixture. Andy, Jonas, and I would lay down the backing tracks together as much as we could to get the most human feel possible. Then we would add all the other parts and re-track parts where there were mistakes. We would always initially start with playing together. 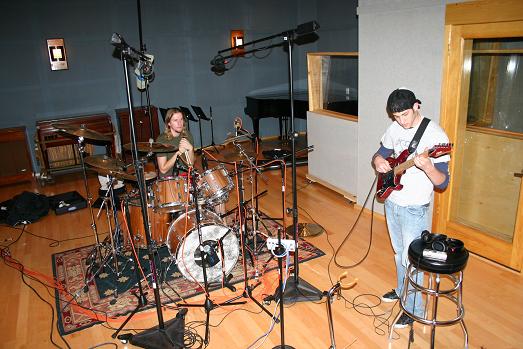 UberProAudio: The snare sound is really snappy across the board.  Was that primarily due to the way it was mic’d or was there a lot of processing or some sample triggering afterwards?  Do you know what kind of snare Andy played for the record?

UberProAudio: Do you think that production plays a role in the composition process for An Endless Sporadic or are the “bells and whistles” something that you end up using more as a seasoning after everything’s been written?

Zach: For a long time I liked working on things section by section and adding in all the details so I really know how it will sound. The demos for this last album were very detailed. In the end, I wish that the demos would have been less detailed because at times I wanted to recreate the demos exactly how I was used to hearing them. I now think it’s best to first lay down the most important parts and add in more textures later.

UberProAudio: Having a dual role as keyboardist/guitarist presents a slew of challenges in a live environment.  I’m sure this is compounded by the complexity of the arrangements.  How does AES function as a live unit?

Zach: We still haven’t played a live show but we are rehearsing right now. We are going to play live with a bass player, one other guitar player, and I’m going to play guitar and keyboards. It will be challenging for me but I can definitely manage. It’s just a matter of organizing patches well, and compromising. Everything has been sounding great so far with just us four.

UberProAudio: AES has a real vintage prog sound coupled with a relatively modern approach to composition.  Where do you think that’s coming from?

Zach: ELP is one of the first bands I can remember ever hearing because my dad would crank it in the car. Having a more modern approach to composition is unavoidable. I’m 23 years old and its 2010.

I approach writing with the mindset that any combination of real instruments, software instruments, samples, or styles of music can be blended together. There are no rules. I’m so lucky to live in a time where it is so easy to be exposed to all kinds of music from all over the world with a few mouse clicks.

UberProAudio: Who are some of your biggest influences as both musicians and writers?  Do you and Andy work on the writing together or is it more of an independent compositional process for you?

The composition side of things is mainly coming from me but Andy is very important in letting me know if I’m writing something good or if I’m failing. Andy makes creative decisions as to what the drums will do and by being there to record drums for the demos speeds up the writing process a great deal.

UberProAudio: Two tracks from your 4 song debut "Ameliorate" made it onto video game soundtracks; first "Sun of Pearl" on the Tony Hawk's American Wasteland and later the track "Impulse" featured in Guitar Hero III: Legends of Rock.  How did AES land the video game placements so early on?  Was it a little surreal to have half of your debut release do so well in such an esoteric genre of music, especially when you and Andy were living at different ends of the United States when AES was working on writing for "Ameliorate"?

Zach: When we recorded our first song, Sun of Pearl, Andy was working for Neversoft. At the time, Neversoft was doing the Tony Hawk video games and the producers of the game liked our music. When Neversoft did Guitar Hero 3, they asked us to write another song to see if it would be good for the game.

It was a very exciting time. I couldn’t believe the amount of comments we were getting from fans.

UberProAudio: Anything on the horizon for An Endless Sporadic that you guys are gearing up for?  What's next for you?

Zach: We are going to play live starting in June.

Make sure to check out An Endless Sporadic at http://www.anendlesssporadic.net