UberProAudio was lucky enough to talk with Brian Byrne, guitar player for the Long Island based alternative rock band Envy On The Coast. We discuss Envy On The Coast’s new album LOWCOUNTRY (March 2010), a new music video, the bands upcoming tour with Fall of Troy, and of course lots of guitar gear! 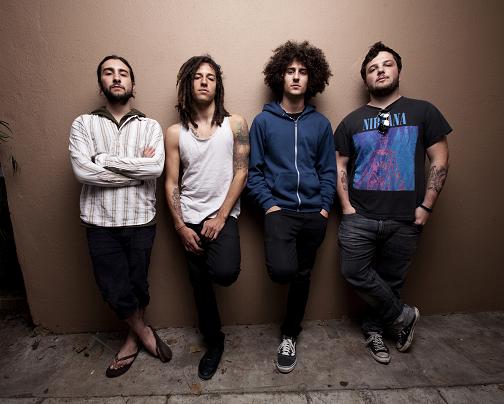 UberProAudio: Hi Brian. Thanks for talking with UberProAudio. So, tell us about the new Envy On The Coast album, “LOWCOUNTRY”. What can fans expect with this latest release?

Brian Byrne : Thanks for wanting to talk to me!  I think this record will polarize a good bit of the fan base we've built over the past few years. I think it's a much tighter, more focused release as far as the musicianship and songwriting goes. A lot of the math-y, over-thought parts went out the window when we wrote this record and that was definitely a conscious decision on our part. We wanted to re-align the focus of our band to what makes us excited about music, and that's aggressive drums and bass that are always in the pocket. Everything else that followed was a direct result of Ryan and Jeremy laying down a solid groove as a foundation.

UberProAudio: How would you compare LOWCOUNTRY with the bands first full length album Lucy Gray (2007)?

Brian: That's a hard question for me to answer only because I feel like we are a completely different band with a different mindset. Our first record was us being thrown into a situation we'd never been in before and expecting a lot out of ourselves, whereas this record was more relaxed and learning how to have fun while letting it be a very natural, organic experience with no expectations or plan, other than to make it groove.

UberProAudio: You worked with producer Sean Beavan on LOWCOUNTRY. What did Sean bring to the table?

Brian: We went with Sean obviously because of his stellar track record with Marilyn Manson, and Nine Inch Nails, but more importantly because when we had our initial conversation, his vision for the soundscape of the record was very much in sync with ours, almost to the point of being weird. Sean is an absolute pro at getting the best performances out of his artists and nothing is ever forced. We also liked the fact that his previous records not only sounded great, but really interesting and weird. Not that we are breaking any sonic boundaries with our recording, but his approach to tracking and recording everything is very much his own. At one point I was tracking guitars through a clock radio...that was the apex of weirdness!

UberProAudio: EOTC is also part of the 9th release in the "Punk Goes" compilation series, “Punk Goes Classic Rock”, available 4/27/2010. Tell us about this record. How did you get involved? What track did you record?

Brian: The record is just like all the other Punk Goes ______ records, only this one treads a bit more dangerous territory, being that these are universally timeless songs being covered by today’s "punk" artists. Our label called us one day and asked us to be a part of it, and we were a little skeptical because sometimes these things can come of WAY cheesy. However, our band, in my opinion, has always done a really good job at covering songs in our own way while maintaining what made the original song great. We chose Jimi Hendrix's version of "All Along The Watchtower" for our track. As a guitar player, that was especially daunting for me because you're talking about a legendary guitar performance that can never be topped, I just tried to have fun with it and do my own thing and I think it came out pretty sweet!!!

UberProAudio: The Sommatone website shows that you use a Sommatone Roaring-20 2X10 combo amplifier. How did you get hooked up with Sommatone? What makes this the right amp for you?

Brian: I got hooked up with Sommatone through Brendan from Circa Survive. We were visiting those guys in Doylestown and he brought me out to their practice space and showed me these new amps he was using and I was hooked!  The reason I love it so much is that it can do A LOT of stuff, definitely not a one trick pony. Plus, it's very pick responsive so when there’s a dynamic shift I don't necessarily have to pan down my volume or anything, I can just pick lighter. It's an all around great amplifier.

UberProAudio: When you were in the studio recording LOWCOUNTRY did your studio guitar rig differ from your live rig?

Brian: In the studio I wanted to be open to anything Sean suggested as far as guitar tones went since he gets such cool sounds. We ended up using his Gretsch Sparkle-Jet and a really old Fender Twin for a lot of the sounds on the record. We wanted a really old, warm, swampy sound for my guitar and that was the setup we ended up rocking for most of the process. My Sommatone came in handy for the more crunchy, British sounding parts and it records amazingly.

UberProAudio: Do you spend much time working on tweaking your guitar tone / gear or do you like to just set-it and forget-it?

Brian: I am a total tone snob so I change my settings from show to show. Each room/stage sounds drastically different so I do everything accordingly. I wish I could just set it and forget it sometimes because I'll spend more time on my knees tweaking a pedal rather than concentrating on having fun!

UberProAudio: In February, you guys announced you were shooting a new video for "Headfirst in the River." What is the concept for this new video?

Brian: Hmmm, I'm not sure how much I can divulge as far as what the video is about because we want it to be a surprise. What I can say is that we had to call in some major favors from some friends of ours and it turned out AMAZING. I can't wait for everyone to see it.

UberProAudio: The band has shot two other music videos in the past. How do you come up with the concepts for them? Walk us through the process the band takes to make a music video.

Brian: Well those two videos were much different from the way we shot the new video. We'd receive treatments from the director, approve them, show up to the shoot, do our thing and then peace out. The 'Mirrors' video was awesome because we were in Paris but in retrospect, it probably wasn't a great idea to have us dressed in ruffled shirts running around France. We don't want people to get the wrong idea. The new one was a much more collaborative, team effort and it came out way better for it.

UberProAudio: The Fall Of Troy, Envy On The Coast and Twin Atlantic, are on a US tour in March and April. Is this your first time playing with these bands? Are you stoked for the tour?

Brian: We had played with the FOT dudes on some festivals and whatnot but never actually gotten to hang out on tour together, so far it's been an amazing experience and all of those guys are so much fun to hang out with, on top of being fantastic musicians. We played with Twin Atlantic on a show we did in Glasgow 2 years ago and we got along really well then and we heard they had signed to Red Bull records and they ended up recording in the same studio as us. It was so weird...we showed up to pick up something after we were done recording and they were all just hanging out...and now we're on tour together. Funny how things work out.

UberProAudio: What does the future have in store for Envy On The Coast?

Brian: Hopefully a lot more touring, a lot of international stuff, we'd love to go back and visit Japan, Australia, mainland Europe, and possibly some weirder places...who knows? I just want people to hear the record.