Neil Boshart is the lead guitar player for the mega popular [one of our favorites] Canadian based band Silverstein. Amid a summer tour that includes shows on the Warped Tour, a new song on Guitar Hero World Tour, and more, Neil took some time to give UberProAudio the scoop on his latest guitar rig, and what he and the band are up to. 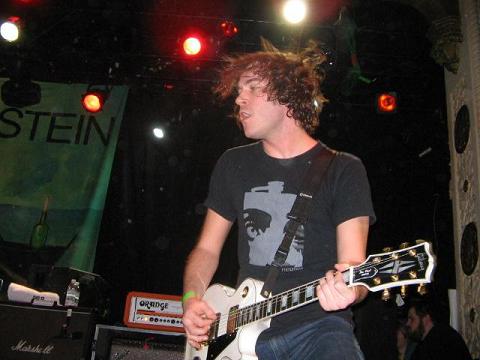 UberProAudio: Thanks for talking to us Neil. We and all the Silverstein fans have been dying to know what gear you are using in your current guitar rig. Give us all the juicy details man – we want to know it all!

Neil Boshart: This month I will be doing the Warped Tour in Canada and in the Pacific United States. Live I will be using my white Les Paul Custom through the 100 watt Orange Rockerverb to my Mesa Boogie 4x12 cabinet, For my clean tones I always use my 100 watt Fender Twin Reverb.

The pedals I use are: Ibanez Tube Screamer, Line 6 Echo Park, MXR Phase 90, Electro Harmonix Pulsar Tremolo, Jim Dunlop Crybaby from Hell Camo Wah, a Boss Super-Shifter for dive bombs, a BOSS TU-2 and a Whirlwind A/B switcher to switch dirty/clean amps. All of my wireless components and microphones are made by Sennheiser. I use Dean Markley strings 11-52 and Jim Dunlop guitar picks.

[Checkout our rig page for Neil]

UberProAudio: Any plans for new gear? Anything on the wishlist?

Neil Boshart: I really want to try out that new Joe Satriani delay pedal. That could be my next purchase. I could use another metal guitar, maybe another Jackson as well.


UberProAudio: What two pieces of gear are most integral to the Neil Boshart guitar sound?

Neil Boshart: My Les Paul custom is what makes my sound. I really use that guitar to its full potential using both pickups. The location of the pickup selector on Les Pauls makes for quick and flawless switching.


UberProAudio: Silverstein released a new album, A SHIPWRECK IN THE SAND, in March. Many consider this the greatest album you guys have done to date. How would you say this album differs from past Silverstein records, such as ARRIVALS & DEPARTURES?

Neil Boshart: Thanks to the fans for liking it so much. It differs in several ways. First, it is a conceptual album which we have never done previously. It is also an album that we just went "all out" for. During the process of recording it we just kept adding on all these parts and put more thought musically into the songs. Our producer Cameron Webb was very encouraging in that aspect. He loved to add layers to make songs more vibey.


UberProAudio: What gear did you use on the new album? Did it differ much from your live rig?

Neil Boshart: We used a lot of combinations of guitar amps. We had literally a wall of amplifiers of different models. To name a few, we had:  Marshalls JCM800s and a Vintage Modern, a VHT Deliverance, MESA Boogie Stilleto, a Soldano and a modded Traynor. Honestly, my live rig is very identical to my studio sound.


UberProAudio: Silverstein recently released the song I Am the Arsonist, for the Guitar Hero World Tour game. So you know we have to ask – what is the highest level you can play the song on?

Neil Boshart: I have not tried our song on Guitar Hero yet but I can tell you right now that I can play expert on just about any song. Anything less than expert seems boring for me, haha.


UberProAudio: What bands have you been listening to lately?

Neil Boshart: Mastodon and the new Taking Back Sunday


UberProAudio: You guys are playing the Warped tour this summer. What’s it like playing a festival that size?

Neil Boshart: Playing Warped is pretty great because you’re playing for kids that have different tastes in music and you get a great chance to make new fans. This year there are at least 15 bands on Warped that we have toured with before. So we will be hanging out with a lot of friends, it will be fun!


UberProAudio: When you first joined Silverstein, did you think the band was going to be this big?

Neil Boshart: I like to have no expectations in life so I can never be let down. So, no.


UberProAudio: A new album, Guitar Hero, huge tours…What else does the future have in store for Neil Boshart?