Not many guitarists or musicians for that matter have the type of staying power that Michael Schenker has had in the music industry. Playing in bands UFO, founding the mega-famous rock band the Scorpions, and Michael Schenker Group, Michael has made a name for himself that will last forever. In this interview with Michael we talked about his guitar gear, current projects, and more. 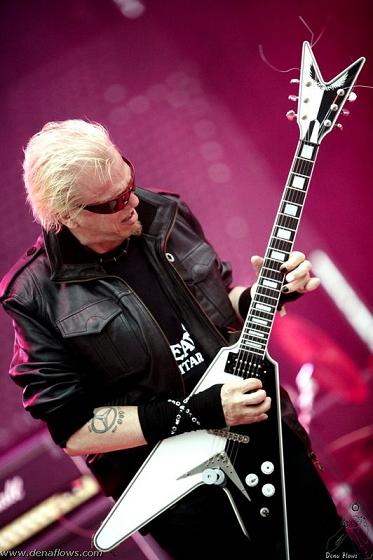 UberProAudio: Thanks for speaking with us, Michael! Let's talk about your guitar rig. What gear are you currently using?

UberProAudio: MSG has been praised for both its studio and live albums. How does your live setup differ from your studio one?

MS: I don't play with effects in the Studio. They are put on afterwards while mixing.

UberProAudio: How has your rig changed throughout the years? For example, how has it changed from the first MSG album compared to In the Midst of Beauty?

MS: On the first MSG album I was still playing my UFO Marshall. That one broke in '84. Since then, I played the Splittchannels.

UberProAudo: Tell us about your relationship with Dean Guitars. How do they help enhance your music? Why should people use them?

UberProAudio: Give us the scoop on Gipsy Lady - a Michael Schenker and Gary Barden acoustic project. The album comes out this month!

MS: I have been curious on how my acoustic material would sound like with Gary's Vocal. So I gave him material to experiment with. The outcome was fantastic – we carried on until we had an album.

UberProAudio: Gipsy Lady is rumored to feature everything from flamenco guitars to fiddles. Talk to us a bit about the transition from electric to acoustic.

MS: I recorded my guitars first as usual, then gave it to Gary for the vocals. And then Michael Voss did the rest.

The difference between playing acoustic compared to electric is that I don't bend strings as much and try to keep it very melodic.

UberProAudio: With your Greatest Riffs album coming out this year, can fans expect to see a new Schenker solo album in the near future?

MS: I am focusing on Schenker/Barden at the moment, with some exceptions in between like Scorpions, etc.

UberProAudio: Any plans to tour this summer? Where can fans expect to catch you?

MS: We are touring the US in June, July. Europe in September, October. Maybe Japan with the ITMOB album line up. Scorpions in July in Greece.

UberProAudio: Talk to us about your first gig with Rudy and the Scorpions. You were only eleven years old at the time! What was running through your mind?

MS: My brother was 16 when he started the Scorpions. I was 9 and started playing guitar when I was 11.

Rudolf connected me with a band in Sarstedt, where I was born. One day my parents were taking me to see the Scorpions live, and that’s when I played one or two songs with them.

I don't know what I was thinking. Just having fun playing.

UberProAudio: Describe to us the first time your brother brought home a Flying V guitar. What made you want to play it?

MS: It was an accident. I broke a string on my Les Paul and swapped guitar with Rudolf. Thats when I found my first satisfactory combination: 50-watt Marshall and the V.

UberProAudio: How did you communicate with fellow band members until you became fluent in English? Tell us about trying to write a song knowing virtually no English.

MS: That’s it – you don't need to speak English to write music.

UberProAudio: What was the most difficult thing about first touring in America and the UK? Why?

MS: I was a very fragile being in my earlier years. That made it very difficult for me to tour.

UberProAudio: You've been pumping out albums at a steady rate since the 70s. What other Schenker projects, albums, and tours do fans have to look forward to?

Also, check out our Rig page for Michael