Transfering audio projects between Daw's like Cakewalk Sonar to ProTools

Currently there are many different DAW's (digital audio workstations) available to the recording studio owner. There is no doubt that digital audio and computer recording has reshaped the way we work in the studio. The problem is that many of us don't work in a bubble - we like to record our music and then take it to a friend's or a professional studio to record more tracks, mix, or master the audio. Moving your audio projects to another studio posses challenges of it's own. If you are interested in sharing your audio projects with another studio, read further. 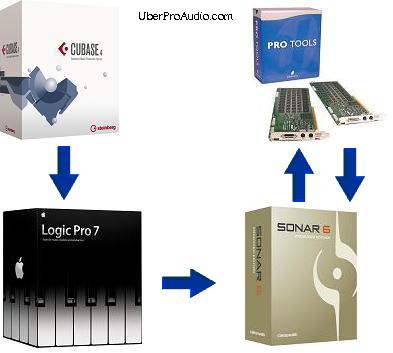 Does the image above look familiar? I have been planning on helping a friend with a studio project he is going to be starting soon and our conversation about recording the upcoming album went something like this picture. He wants to record in Apple Logic on one computer that is near a drum room he has access to. Then he wants to take those recordings to his house to record vocals and guitar using his home DAW system which is running Cakewalk's Sonar. THEN he wants to take all of those tracks and move that project to Protools LE and bring them into a big-time professional recording studio so they can import the project and mix the album. And after that, the mixes have to be sent to a mastering house. That's a lot of transfering of files and projects!

So how can a person go about moving their audio project around from one computer sytem in a recording studio to another? The first method that can be used (and possibly the hard way) is to find every single audio clip that belongs to your project and bring those files to the next studio and attempt to import every file into the DAW, making sure that each clips starts at the exact point in time it is supposed. This method can really stink if you have a lot of punch ins, because lining up the audio in the right spots can be very trying. To simplify this, render all your tracks so that they begin at 00:00:00. To imagine this, think of your guitar solo that you have punched in at minute 3:40:00 of your song. By rendering (or bouncing) the track you can make it so blank space gets added from the start of the song all the way up to the 3:40:00 mark. This means that when you import that track into the next studio's DAW, you just have to line it up at 00:00:00 (really easy) and it will be time aligned as you want it. This method is not going to transfer your plugins and plug-in settings. First, you need to make sure that the other studio has all the same plugins you used on the project. If they do, then you can bring along the plug-in presets and dial them up on their system. If they don't have the same plug-ins, then you need to render your tracks with the plug-ins processed on the track. I recommend not applying any plug-ins until your project is at the very last studio's DAW - probably wherever the final mixing is done. Applying plugins to tracks destructively is a little scary because it's like a tatoo - you are committing to that plug-in setting for the life of the project.

The next way that a project can be shared is using the Open Media Format standard known as OMF, created by Avid Technology Inc. Most DAW support exporting a project in this file format. An OMF file is a binary format file that holds all of the audio and data inside of it. The OMF file doesn't store MIDI or virtual synth tracks, so you have to render these to audio before you export your project, or save this info into another file. OMF also does not recognize plugins, so you need to use the same tips expressed in the previous article to handle this issue.

OMF is a protocol that was formed by a manufacturer which has kept some companies and people from adopting it as a standard. Because of this, some new formats for exporting projects have been created.  One of those formats is the Advanced Authoring Format (AAF). Another is Material eXchange Format (MXF). These formats promise to be more comprehensive than OMF and are not governed by a manufacturer. If you are interested in these formats, check out www.aafassociation.org.

So everyone is probably wondering what I'm going to recommend my friend does to transfer his audio projects around from studio to studio for his new album. I'm going to have him record tracks but do absolutely no plug-ins or mixing during the tracking. When he is done with the tracking, then he should save his project in one of the formats like OMF and bring the data to the pro studio for mixing. If he needs to do midi for some reason during the tracking, I'll have him render it to audio before he moves it from system to sytem, or have him save the MIDI as a seperate file that will be moved with the project files.

I hope you learned a little something. Good luck with your recording and let us know how it goes. Until next time!