Are you working on creating a guitar or bass rig that fits the style of music you are playing, and need help making some gear decisions? In this article we discuss some tips on putting together the right rig for your musical situation.You don't always need the big stack to get the sound that suits your needs. 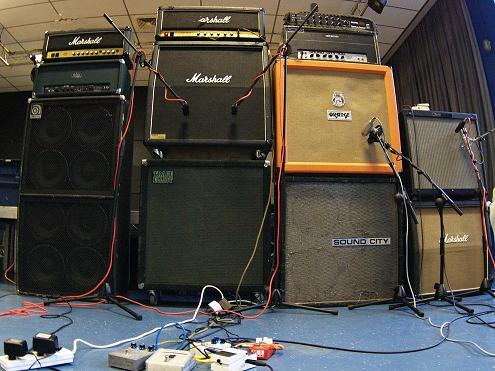 So you just spent $1500 pimping out your rig on a brand new half-stack and a few pedals to run your Studio Les Paul through and now you’re hired as the replacement guitarist in a Celine Dion tribute band.  Hey I’m not judging, we’ve all taken a gig for the paycheck before, but now that money seems like a poor investment when you were singing your praises to the gods of tone just one week ago.  So how can you be sure that you get the gear to suit your needs?  Well, step one is being honest with yourself and realistic about your goals and level of musicianship.  Ask yourself what you’re hoping to accomplish with your music and then answer realistically.  Are you hoping to gig out in a wedding band and make some money, record quality demos in your project studio, or blow the doors off the dingiest basement metal club in town?  Are you a gigging musician?  A songwriter/composer working exclusively out of your studio?  Novice or beginner?  Perhaps you’re an amateur in the truest sense of the word?  These are all very different paths that will lead you to very different kinds of rigs, none being better or worse than the other; simply more or less appropriate for the musical task at hand.

First let’s talk instruments here.  Maximum versatility will be obtained by having two go-to axes; one with single-coil pickups and one with humbuckers but if you can only swing one try spending the money on something that’s got humbuckers with coil tapping capability (or having it installed).  If you’re not looking for any sort of Slipknot-esque, high-gain tone then you can probably forego the humbucking set-up but I’ve always had an affinity for soloing in the neck position no matter how much I might relish the sound of a ’59 telecaster plugged into a Fender Twin.  As far as basses go, think about the kind of music you’re working with.  You don’t need a Conklin 9 string to play what a Fender Jazz can cover if you’re plunking out whole and half notes on simpler three-chord pop tunes but if you’re playing any sort of progressive based music you might want to consider something with at least a low B—especially if the guitar player is rocking a 7-string at any point.  Your tone’s likely to be much tastier if you grab a bass with some nice active pickups too and you can cover both requirements economically with a decent sounding 5 string; anything else is probably gravy although I’ve played with some bass players that have sworn by their specialty instruments.

From here, let’s take the scenario of a home studio based musician.  There’s not much of a point to spending a whole lot of money on a single amp whose tone is best when the volume is maxed out at 11 (read: Spinal Tap joke) if that level of power is destined to blow the windows of your house out and send the cops knocking on your door (unless they show up to jam).  VHT may make the amps that Metallica coined their signature “Black Album” sound with but is that the tone you’re going to end up using to record your next country inspired demo?  Bassists, do you really need an Ampeg 8x10 cab to play at a cocktail reception?  Not likely.  More importantly, given your explorations in songwriting and/or composition (or whatever use your studio may be tailored to) you’re probably going to want versatility—speaking of which, some guitar amp modelers come with bass models as well, or have expansion packs available.  So unless you want to end up spending a whole lot of cash on an extravagant amp collection before you even consider the axe that’s grinding your tone out, you may want to think about the beauty of amp modeling and how it can maximize your project studio’s potential at a fraction of the cost of one great sounding amplifier.  For the best results when using any sort of amp modeling for recording you want to make sure you’re using a quality guitar or bass to get the job done.

For the beginner, eager novice, or avid hobbyist solid state amps, simpler multi-effects units and a decent guitar will keep you rocking.  As long as you’re happy with the tone you’re getting then it doesn’t really matter what the pros are using.  If a solid state amp and digital or tube-based multi-effects is doing the trick for your own playing at a reasonably low volume there’s no real reason to go out and buy a tube amp that needs to be halfway cranked to get a good tone.  Tube amps are funny like that—volume has a much more significant effect on their tone than it does with a solid state amp; so much so that low volumes on some tube amps can cause them to lack fullness that only emerges at rehearsal or gig-level volumes (depending on the wattage of the amp).

For the pro or semi-pro musician there isn’t much I can say here that they’ve not discovered on their own.  A great axe, a quality amp, and whatever effects get the job done; it’s your responsibility to know what that job is.  At the end of the day it’s not about how much you spend (or save) on a rig; it’s about whether or not it does what you need it to do and survives gig after gig.  You want quality tone but you want it to last too.  Whatever you’re purchasing is undoubtedly an investment of sorts and you’re bound to make your money back over some period of time.  If you’re in a state where you’re wondering exactly what to invest in, then you’ve likely amassed the experience to teach you about all kinds of amp/guitar combinations as well as certain pedals and effects units.  You’re the captain here and should be coming up with what works best for your own playing; no one should know that better than you.  I’ve played gigs where I played a Jackson guitar loaded with DiMarzio pickups (a Blaze in the bridge and a Satriani Fred in the neck) through a Fender DeVille.  It worked for me and the band I was playing with at the time.  In fact, I used to relish the sideways looks from some of the guys that watched me set-up because 9 times out of 10 they were the same people who complimented my tone later in the night.  A helpful hint though: combo tube amps are sounding great these days and are not only economical, but they’re way easier to lug around than half-stacks.  Moreover, you’re less likely to get short-ended through the PA because you’ll get mic’d properly instead of being on the receiving end of a crappy “that-looks-loud-enough” assumption.  I can’t tell you how many guitarists I’ve seen shortchanged by novice sound techs just because they brought their Marshall and 4x12 cab out of the garage; it reinforced my affinity for the DeVille and I kept my half-stack at home in the studio (this was before I discovered the wonderful world of amp modeling in a studio setting, of course).

At the end of the day you want a tone that will keep you playing and keep the audience listening.  Let your ears and the crowd response work in tandem with one another and you’ll find the right sound for what you’re doing.  But bear in mind that context is everything and there are certain tones, pedals, guitars, and amps that may sound phenomenal independently but no matter how much you admire them, just may not work in some settings.  Keep playing and remember that when it comes to tone, it’s a lifelong goal for guitar and bass players.  Sometimes we get stuck in a way of doing things and one circumstance or another provides a revelation that may result in a total paradigm shift for us.  Some guys like straight guitar/bass-amp, some guys like rack effects, some like pedals, some like multi effects, some like amp modeling, some like it all.  What do you like?  That’s the important question.  When you can answer it, then you probably won’t want to put that axe down because you’re going to love the tone you found.

Kevin Williams is a film composer and performing musician in the Providence, RI area. Checkout Kevin's music and what he is up to at SoundClick