The Great Gig (Not) In the Sky Part 1: Getting There

In part 1 of the "The Great Gig (Not) In the Sky" series, uber musician Kevin Williams walks you through the first steps you can take towards getting that big opening slot for a major band gig. Whether your job is to play guitar, bass drums, or hold a mic and look pretty, you'll want to read this! 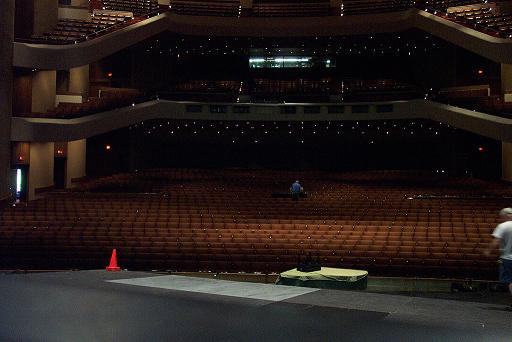 Things have changed a lot since bands moved to LA with the motive of regularly playing the Sunset Strip Clubs in hopes of getting noticed by a major label.  These days blockbuster artists like Radiohead sell their albums online with no broker between the artist and listener; legendary supergroups sue their fans for illegal downloads; the biggest geek in high school is somehow capable of emulating the sound of John Bonham’s drum kit in his bedroom studio; and your band could open for the next set of trendsetters before you land your first crappy record deal.  That’s right folks one-off festivals like Rock the Ink and Locobazooka, in addition to radio contests that offer opening slots for nationally touring mega-stars are giving the unknown garage rockers of the world a chance to unite and show bigger-than-you-can-dream-of audiences their stuff.  The Jagermeister tour is consistently looking for bands to push (hello Hinder) and acts as big as Coldplay have offered bands you’ve never heard of opening slots (unless of course you saw them open for Coldplay at one of these gigs).  You can deny, deny, deny but if that’s the case you’re likely in a band that’s been a bit embittered by being left out. Don’t delude yourself and your band into oblivion.  I’m here to help.

By now, if you’re gigging pretty regularly you should have an online press kit.  If you don’t, sign on to a website like Sonicbids after you let your girlfriend smack you around for spinning your wheels when you kept insisting that you guys were “really gonna make it this time.” You were totally lying the whole time if you hadn’t set this up yet.  The online press kit is one of the most advantageous things you can have if your band has any aspirations of playing with a major act.  It’s convenient for all parties involved.  Whatever website hosts your online press kit is likely to have various events associated with it; at least it should if it’s reputable.  Finding that out is up to you so make sure you do your research.  By having everything right there at the click of a mouse prospective clubs, contest juries, festival coordinators and promoters can check your stuff out and see how it gels with what they’re looking for.  For larger-scale events there’s usually a submission process that may involve some kind of fee.  Before you start whining about it let’s remember one little principle of economics peeps: It takes money to make money.

Social networks like Myspace and Facebook have exploded with hundreds of thousands of musicians posting new recordings and hundreds of thousands of people listening to them.  And there’s a whole world of networking sites dedicated exclusively to musicians and their music.  Some, like Soundclick will even chart your different songs’ progress.  Indie labels scour these sites looking for bands to sign distribution deals with but ultimately signing one will probably leave you no better off than you were before you signed on.  Well, you’ll have  bragging rights I guess and your girlfriend might slightly believe you the next hundred times you tell her you guys are “right on the brink.”  There is no denying that the internet, with all the glorious controversy it’s provided regarding music piracy and such things, is perhaps the single most advantageous way you can market your band to the masses short of the radio airwaves.

Make sure you have no reservations about what you’re letting people listen to.  If you’re overly critical of it there’s no reason to think someone else won’t be.  You want potential fans and employers listening to something you truly believe in.  If you don’t have enough faith in what you’ve put out there to market yourself you need to reconsider what you’re letting people have access to or that perhaps you might be better off in a different band; or doing something else altogether.  Don’t save your best song for your CD so people will buy it.  That’s self-sabotage.  When was the last time you bought a CD based on hearing mediocre album fillers?  Let the world hear your best work.  Show attendance and CD sales will be augmented if you give people a reason to like you right from the start.

It’s equally important to make sure that whatever recordings you post are an accurate representation of your band’s sound.  There are few things more frustrating to a promoter or club owner than not getting what they thought they were going to; especially if they’re investing their time in YOUR dream. If you ride around with your buddies in the car and make excuses for the snare sound on a song you don’t like as much as three or four other tunes your band has written why is this something you want people who matter to be evaluating you on?  You’re wasting their time and yours.  Put your best foot forward, it’s really just common sense here.  If your stuff is good, and it should be if you’re making this kind of investment of time and potential dollars, then you may land a big-time gig simply because one person on whatever board is reviewing submissions REALLY digs your stuff.  And chances are that’s going to happen if you can say with an objective certainty that you’ve got something good going.

You’ll have to include some kind of write up about your band.  Let me state the obvious: don’t have the biggest stoner or dumbass have to be the responsible one here.  But the smartest guy in the band is not necessarily the most articulate.  The best way to do this is to probably have everyone write something and then have the band mate everyone’s most comfortable with be the one to put it all together.  This way you’ll ensure that the description of your band is a compilation of everyone’s perception of your sound.  You don’t want infighting about stupid things like band bios to be the ultimate undoing of your act do you?  Make sure you include magazine and newspaper reviews if applicable and list some of the more notable clubs/cities you’ve landed gigs at.  You’ll also want to mention any nominations and/or awards you may have received by local newspapers or online magazines.  If you’re just starting out, leave that information out and wait for this kind of press to build but you may want to include a mention of members’ previous bands if they’d had some noteworthy accomplishments.  Just don’t forget to add good press in as it comes.

Which leads me to the next phase of presentation.   Pictures.  Make sure they look professional (read: don’t hire a girl with a camera because she wants to sleep with one of you and she isn’t the fastidious type).  You can have anyone do these but make sure you’ve seen their work and it matches up with how you’d like people to perceive you visually.  Photography is no more point-and-shoot than engineering is simply sticking a microphone in front of an amp.  Make sure your photographer understands the mechanics of what they are doing.  If they don’t, then they’ll be ill equipped to understand your communication of how you want to represent yourselves and it will be akin to going at lengths to tell an engineer specifically what kind of sound you want from your guitar when all they’ve ever done is put an SM-57 right against the grill of an amp.  That’s fine if it works but something else might too and it may remain undiscovered if the person responsible for doing so can’t think outside their own box (read: this is advice for ANYTHING that involves someone else’s artistic contribution to your band).  And make sure that you coordinate your appearances.  This doesn’t mean quixotically thinking you can drop 20 pounds in three days if you’re not as trim as you’d like to be, but dress for both your body type and for the style of music you’re playing.  Put some thought into it as a band.

At the end of the day a solid press kit that presents your band accurately will land you gigs that should have you playing to growing audiences that care about your music.  The only wrong way to put one of these together is in a manner that misrepresents what you’re about.  Don’t take your pictures in a graveyard if you’re a jazz trio that doesn’t want to be booked with metal heads.  Think things through.  It takes a lot more time to go back and do something a second time than it does to get it right the first time because you and your band mates brainstormed together.  You may find yourselves getting offers to play huge festivals that require a substantial financial investment.  This may or may not be worth it.  The next phase of this series will get to that and how to make the most of these kinds of events once you get there.  We’ll also explore when it may not be the most opportune to take a gig like this so that you can work smarter, not harder as a band.  But don’t forget the really important thing: enjoy the ride.  There’s a certain kind of fun to be had in coordinating how you’re showing the world who you are that’s analogous to deciding how you want to go about recording some of your latest material.  Embrace the creativity involved in creating your band’s persona and putting it forth.  Getting to the gig should be just as much fun as playing it.  If it’s not, then maybe it’s time for you to reevaluate your involvement.  Just make sure you tell your girlfriend.

Kevin Williams is a film composer and performing musician in the Providence, RI area.  In addition to playing bass and handling production duties for psychedelic progressive rockers Hemlok (www.hemlok.com ) he is currently wrapping up his debut solo record on which he schizophrenically handles the duties of vocalist, guitarist, keyboardist, and bassist.